Welcome to the world of the Electric Motion HERE’S a bit of a teaser question for you: What has almost three times the torque of the Triumph Rocket 3 and weighs about the same as both of the Triumph's wheels combined? Welcome to the world of the Electric Motion (or EM for short) EPure range of trials bikes, and the 600Nm or 442lb-ft of torque they can produce. The EM bikes are out and out trials machines, and nothing like the Oset bikes Visordown tried out in 2019. Where the Osets are lightweight, a little bit spindly, and more of a hobby-grade product, the EPure range are championship or clubman trials-ready machines. Visordown went along to the fantastic Inch Perfect Trials to give the new machine a try. 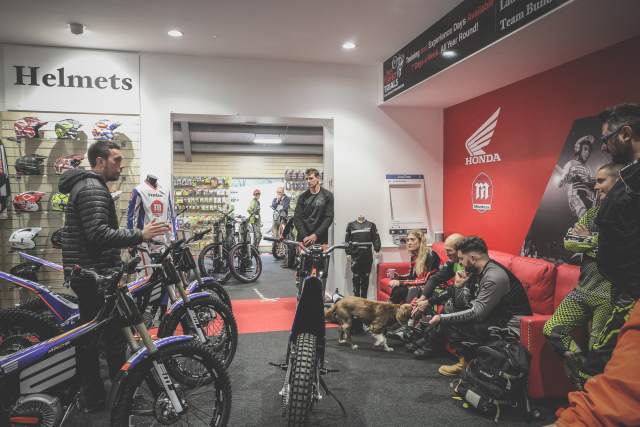 An intro to the Electric Motion EPure

Before heading out into the wilds of the stunning, and thankfully sunny, Lancashire countryside, we’re sent to the lower part of the valley for a bit of trials riding CBT. A few markers are set out and figure of eights are ridden – just to make sure I’m not as shit as I look. First impressions of the bike are that it’s actually all very similar to a conventional petrol-powered trials bike. The EPure Sport and Race models come equipped with a proper hydraulic clutch. It’s there to make some of the more advanced riding manoeuvres a little easier to tackle.

With my low level of trials riding ability, I didn’t really touch the thing, although the psychological placebo of having it their pandered to the fossil fuel-loving part of my brain. As with any electric bike, the torque and power delivery from the motor is perfectly linear and almost fools you into thinking you’re better than you are. 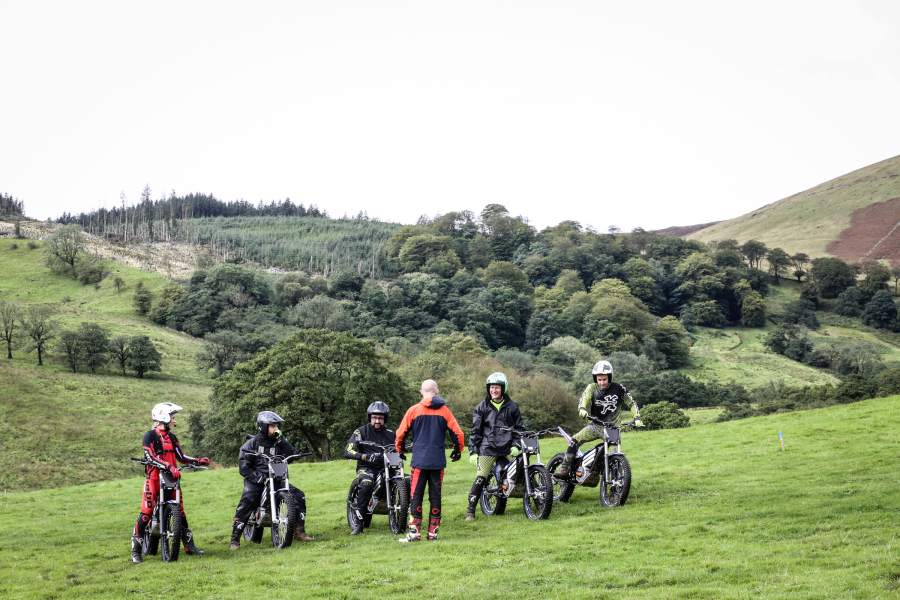 But that monstrous torque figure is never far away, and while for the most part, the bike is only as quick as you ask it to be, an unwitting moment of over-exuberance did see me whisky-throttling my way into the scenery. Lesson learned – don’t dick around with electricity kids.

After writing some lines on my mental blackboard, we were moving away from the CBT part of the day, heading for some climbs and ditch crossings that felt much more like a proper trials ride.

One of the biggest benefits of having all that torque behind you is that the EPure doesn’t bog down, hit flat spots or stall if a climb is too steep. It just digs in and drives forwards, regardless of what is in front of it. Another benefit – and there are many for us to get through – is that for a relative novice on the scene, I’m not worried about being in the correct gear. With a single-speed transmission, the EM is always in the right gear. It also never stalls. Oh, and best of all, you don’t spend all day kicking the thing over to get it going after you’ve dropped it, which is great for me. I fall off a lot. 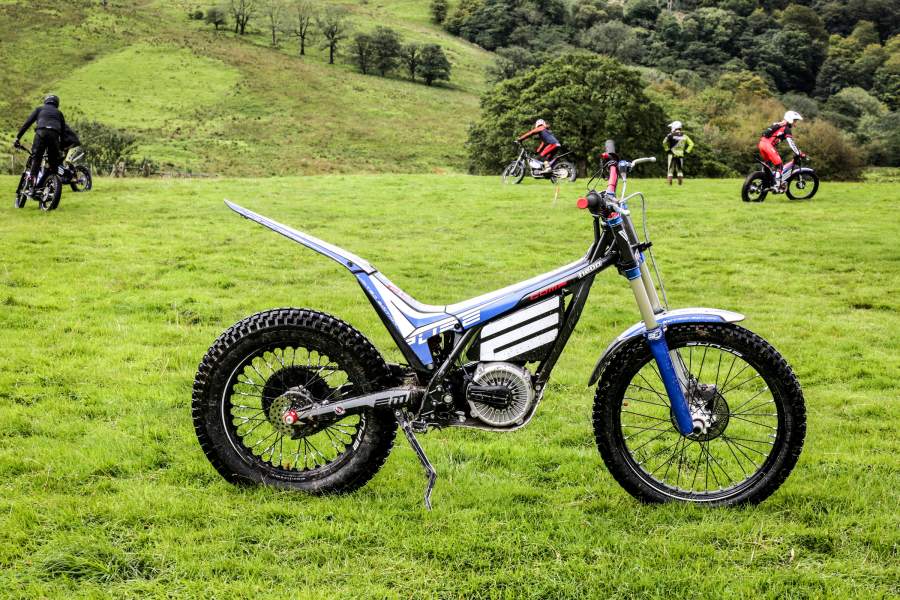 Joking aside, there is one proper scientific reason that makes electric bikes in slippery mud a better option than petrol. An electric motor doesn’t produce its power in perceivable pulses like a two or four-stroke engine does. Each pulse of power from a petrol engine is an opportunity for the tire to lose traction. Once lost, that traction is hard to grab hold of again, and whichever way you fix it, anything done is killing your momentum. The smooth delivery of an electric bike allows the rear tire to dig in and hold onto the traction. While I’m not saying that the EM can make climbs a petrol-powered bike could not, in my inexperienced hands, climbs were more controllable and I felt much more confident. 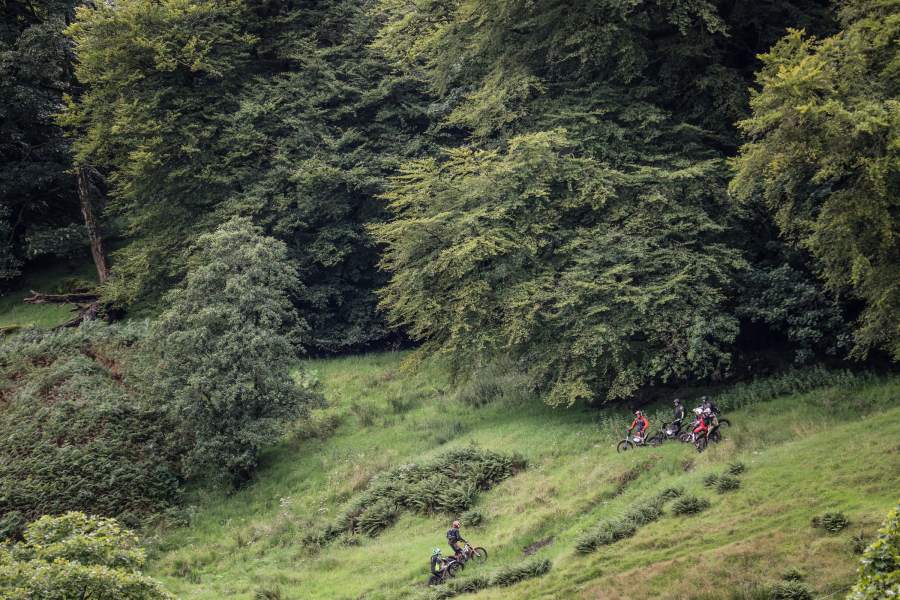 With the morning’s riding being mostly about feeling out the bike and learning how it rides, the afternoon was firmly about putting my new-found ‘knowledge’ into practice. We leave the Lancashire lowlands and head to the top of the beautiful Ribble Valley. Sadly, there’s no time to take in the views as we are thrown into the toughest challenge of the day so far. 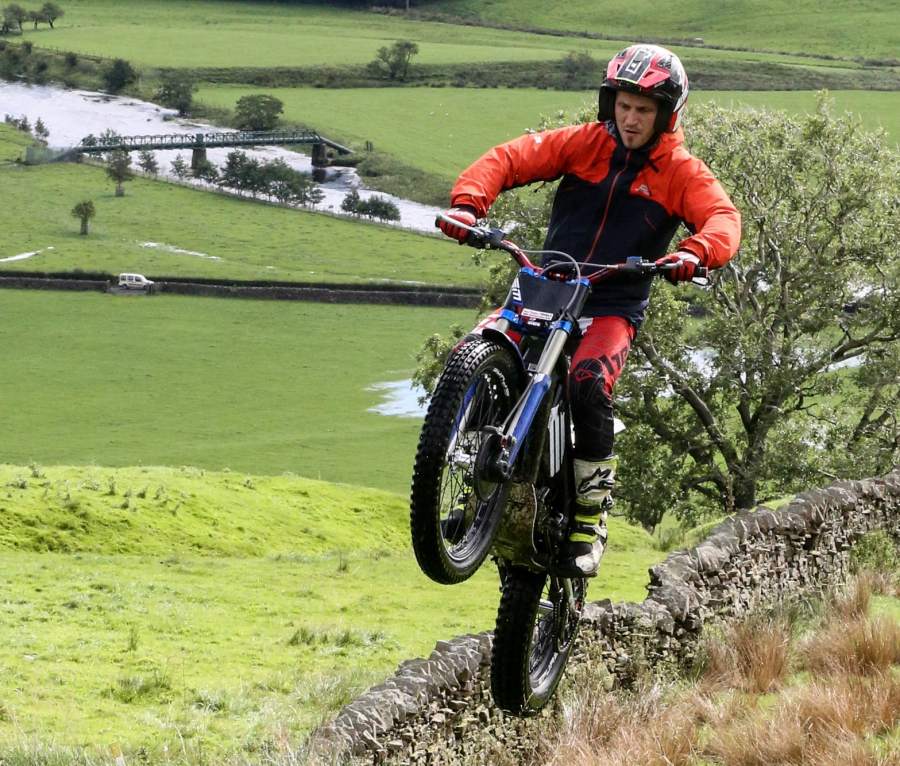 Stream riding is part and parcel of any trial competition. And we weren’t escaping it as we were pointed up a steep, fully flowing, rock and moss filled stream. We’d already completed on stream climb just after lunch, but this one looked more authentically natural. And my ribs were scared.

After watching our instructor heading from top to bottom with all the balletic accuracy of a muddy missile, it dawns on me just how steep it is. At about 35 meters long and rising around 7 meters, Google tells me it’s around a 3% gradient. I’ve struggled to walk up lesser inclines.

My first crack sees me getting 10 meters in. I come to a stop after making the fatal error of looking down from the top of the stream to a large rock on the left-hand side of it. Despite the rock being away from the line I was riding, like a drunk homing pigeon flying into a shop window, I looked at it, therefore I crashed into it. Ribs intact, I line back up for another go, determined to get to the top 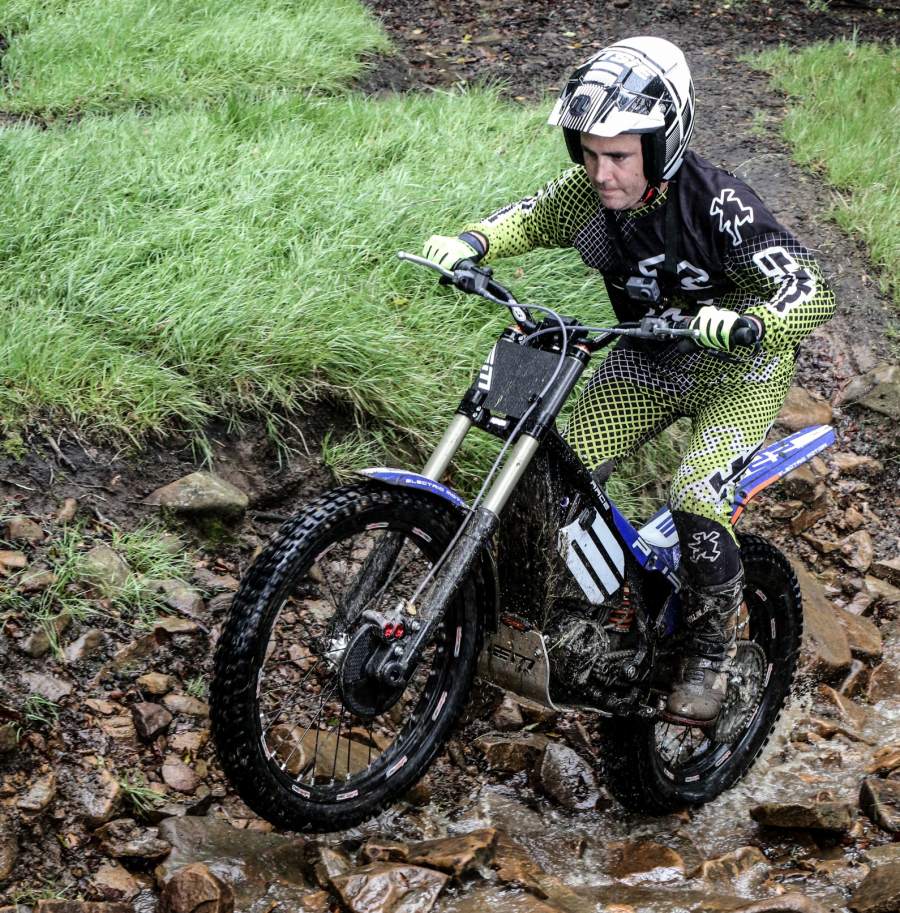 Given that the last run was curtailed due to not looking at the goal, I decided the only thing to do is gun it and stare at the exit point of the stream like it just pinched my wife’s bum. And it worked. Well, almost. I make it about two feet from the exit of the stream, before coming to a stop after getting the front and rear wheels stuck in different ruts. I’m calling that a win.

I’ve toyed with buying a trial bike before, although had only looked at shoddy looking £1,000 shitters that will probably cost another grand to get running right. If I were serious about this type of riding, owned some land myself, or had the cash to drop on a new bike, I would definitely consider buying one. Electric bikes and the great outdoors make so much sense. 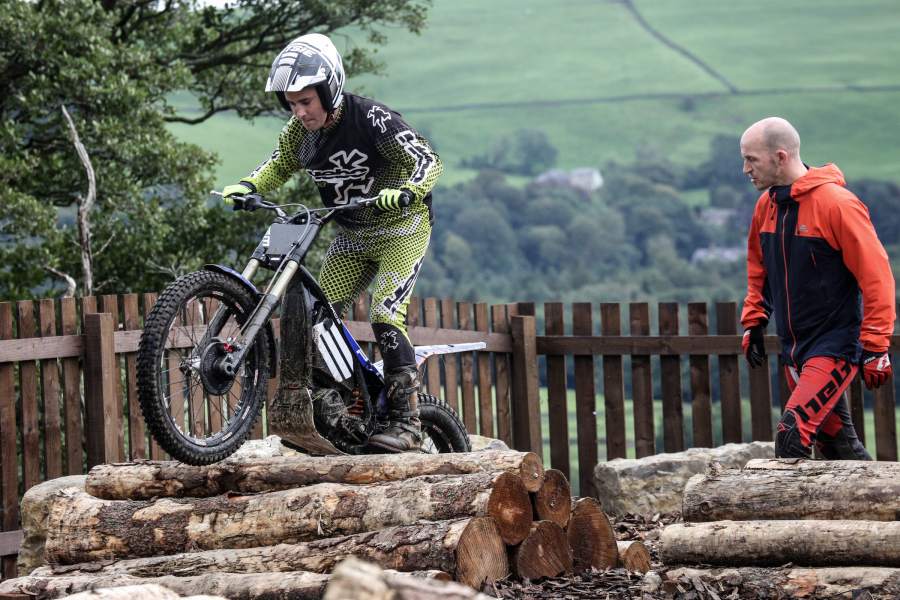 By nature of their design, a trials bike is about as impractical as it comes. Even a MotoGP machine has more range and weather protection! But the thing is, trials bikes don’t need any such luxuries. They need the bare minimum required by law to make them legal on the road. They also don’t really need to go very far, as ten miles on some challenging terrain on a trials bike will feel like 50 miles on a road bike. They also don’t need to be fast, a top speed of 50mph is more than adequate.

So, in this world of short journeys, at low-speed and over challenging terrain, the little Electric Motion has given petrol power a seriously bloody nose. And we’ve not even got going yet. 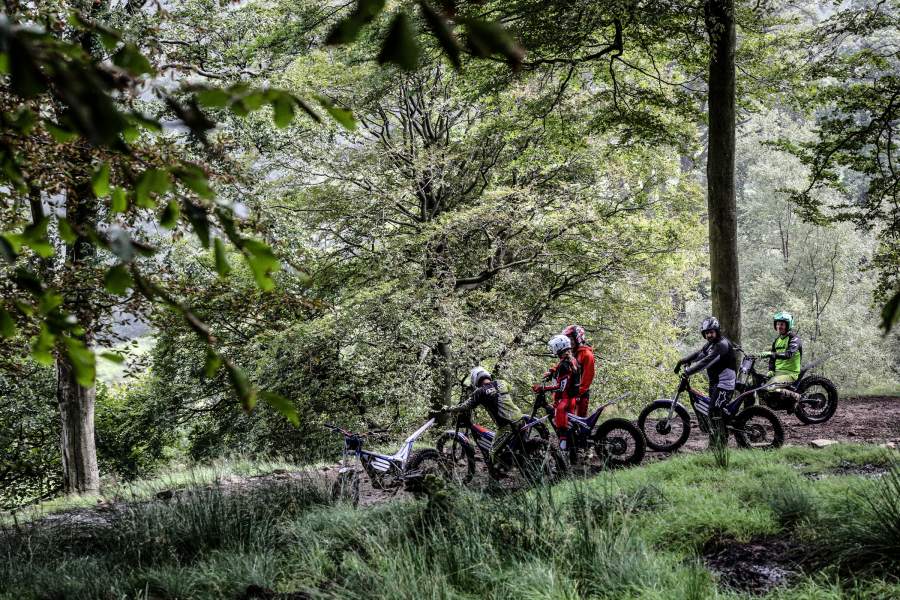 The EPure range of electric trials bikes are about as basic to service as a high-end mountain bike. Give it a jet-wash, lube the chain, bleed the brakes and away you go. No engine rebuilds. No oil changes. No plug changes. No air filter changes. No fuel. Nothing. Think about owning a two-stroke Beta for three years. Now think about all the consumables you’ll need along the way to keep the thing running in top condition. Getting expensive, isn’t it? On the flip side, the EM has a range of around 50km, costs less than a quid to recharge, and can be refilled with electrons in just over three hours.

The Electric Motion EPure is soon available in the USA.  First container is on the water now, while the 2nd container is in production now!

Your cart is currently empty.